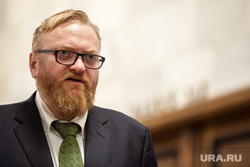 Documents of Russians indicating a different gender will be considered fake if a law banning gender reassignment is passed. Also, doctors who perform such operations will be punished. This was stated by the deputy of the State Duma of the Russian Federation Vitaly Milonov.

“Documents issued on the basis of distorted data will be considered fake. <...> If we recognize that sex change is an illegal act, then sex change operations should now be excluded from the list of medical services, ”Milonov told RIA Novosti.

According to the deputy, the only basis for a sex change operation will be the conclusion of the medical commission. Milonov added that this procedure cripples people.

Earlier, Russia officially banned LGBT propaganda, pedophilia and gender reassignment. Violators of the law will face a fine of up to 10 million rubles.