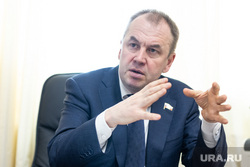 State Duma deputy from the Chelyabinsk region Stanislav Naumov spoke about measures to support businessmen who fell under partial mobilization. On social networks, the deputy published a video in which he spoke about the amendments to the laws that the LDPR faction is preparing, accompanying it with the caption “What should one who is mobilized do with business?”

“The result of our brainstorming was the preparation of amendments to three existing laws. These amendments allow mobilized entrepreneurs to retain the opportunity to transfer their business by proxy,” the deputy said.

Naumov explained that, first of all, amendments will be made to the law on the status of a serviceman. According to the deputy, it is planned to make an exception in this law, which now restricts the rights of military personnel or establishes a ban on doing business, but with the exception of those who were called up by decree of September 21.

The LDPR decided to make another amendment to the civil code of the Russian Federation. In order for an entrepreneur to use different power of attorney tools to conduct his business, and this can be not only family members or close friends. According to Naumov, it is possible to create a special institution of a financial manager who will guarantee that upon returning the entrepreneur will keep his business and will develop it.