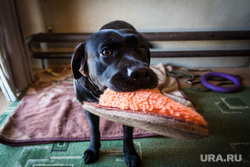 Chelyabinsk landlords, due to increased competition, began to agree to pets living in rented real estate. If in January 2022 a third of apartment owners agreed to move in tenants with pets, now we are talking about 50% or more, depending on the level of the residential complex, said Stepan Podpyatnikov, director of the A1 Real Estate Agency.

“Owners of apartments in Chelyabinsk in old residential complexes are still wary of pets and approve only in 50% of cases, and earlier only a third of the rentier agreed. This is due to the fact that landlords do not want to lose potential tenants and are ready to make concessions,” Podpyatnikov shared.

The most compelling reason for this was the increased number of proposals for the delivery of real estate in six months, as well as a lull in the rental market in Chelyabinsk in May this year. This information was shared by the landlord Irina Shumkina.

“I used to be against tenants living with pets, as the apartment has been freshly renovated, and the animals peel off the wallpaper, make everything dirty. But after the property stood empty for a whole month, and there were almost no calls, I changed the requirements in favor of tenants, ”Shumkina said.

According to Podpyatnikov, in the new housing complexes of Chelyabinsk, the issue of landlords’ loyalty to animals has been 100% resolved. Now in many LCDs all conditions have been created for tenants to live in an apartment with their pets: separate zones are allocated for walking animals, as well as for washing their paws. In such complexes, landlords are more willing to accept tenants with animals.