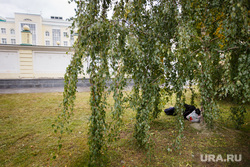 A homeless resident of Chelyabinsk said, whose body of a newborn child was found near the road, said she did not know about the pregnancy. Giving explanations to the investigative committee, the woman said that she went to the storm drain to the toilet, and there she had a miscarriage, a law enforcement source told URA.RU.

“The woman is 36 years old, she leads a vagrant lifestyle, she says that she did not know about pregnancy, since this happened to her for the first time. On the evening of August 1, according to her, her stomach began to hurt badly, in connection with which she went to the toilet in the stormwater trench on Krasnoznamennaya Street, where she gave birth to a child. She claims that the girl was dead, so the woman left the body and left, due to heavy rain, the body was carried to the road through the storm drain, ”the source said.

An autopsy is currently underway to determine the cause of the baby’s death. The homeless woman herself has no previous convictions, she really has no children, she has been wandering for many years, although she has a residence permit in Chelyabinsk. Her friend lives with her on the street, but he slept and did not hear anything unusual from his friend. In the investigative committee, the woman was offered to go to the hospital, but she refused, saying that she was fine.

The body of a newborn girl was found by the road on Krasnoznamennaya Street on August 2. The mother of the child was identified immediately – a local homeless woman turned out to be a woman in labor. The investigation is carried out by the Investigative Committee.