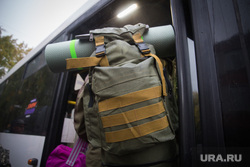 A resident of Chelyabinsk with plates in his leg managed to avoid partial mobilization. According to the head of the regional executive committee of the All-Russian Popular Front (ONF), Denis Ryzhiy, the man was sent to confirm the diagnosis.

“Sergey from Chelyabinsk received a summons the other day and was mobilized; in his case, the health problem is related to a recent car accident and a surgery in the leg of the plate. After applying to the Popular Front, it was decided to send him to a medical commission to confirm the diagnosis. After the leg heals, it will be good again, ”Ryzhiy told URA.RU.

He also reported on another Chelyabinsk resident who was mobilized with a bad back. He did not have time to provide all the information before departure. However, the ONF informed about his condition, and the man was returned home.

The decree on partial mobilization was signed on September 21 by Russian President Vladimir Putin. According to Russian Defense Minister Sergei Shoigu, about 300,000 citizens liable for military service will be called up from the reserve.