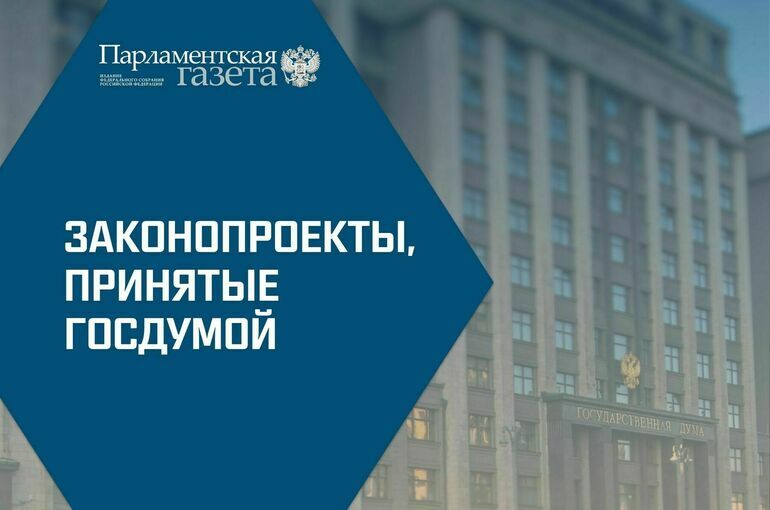 At the plenary session of the State Duma, which took place on June 14, 2022, over 30 bills were considered. Of these, the deputies adopted 16 in the first reading, 10 in the second, and 5 in the third.

Laws adopted by the State Duma

The district court named after Polina Osipenko of the Khabarovsk Territory is abolished and a permanent judicial presence is created as part of the Solnechny District Court of the Territory.

No. 103503-8 (the document was considered in the second and third readings)

When calculating the term for parole, the entire period from the moment the citizen began serving his sentence will be taken into account.

No. 536-8 (the document was considered in the second and third readings)

Responsibility for beatings for persons who have already been prosecuted for violent crimes is being increased.

No. 523-8 (the document was considered in the second and third readings)

It is proposed for those who suffered beatings for the second time by a person previously convicted of a similar crime to cancel the court fee.

No. 67717-8 (the document was considered in the second and third readings)

Provided that new organizations registered in the Kuril Islands, subject to a number of conditions established by Russian legislation on taxes and fees, preferential treatment in terms of the application of reduced rates of insurance premiums.

Bills adopted in the second reading

A residence permit in Russia under a simplified procedure will also be granted to foreign IT specialists and their families. It is also planned to cancel the mandatory availability of a patent for work for such specialists.

It is proposed to establish the possibility of sending blood plasma not only to public medical institutions, but also to private pharmaceutical companies. The decision made will make it possible to establish import substitution in the production of drugs from plasma.

The bill establishes a ban on the creation of new biosphere polygons in reserves. It is proposed to limit the work of already existing ones with the regime of “permissible anthropogenic load” on such territories.

The amendments introduced provide that the release of valuables from the State Fund of Precious Metals and Precious Stones of the Russian Federation will be carried out without amendments to the federal law on the federal budget.

From five to seven years, it is planned to increase the period for which subsoil plots will be provided for use for geological study in the Murmansk region.

It is proposed to allow revision of the essential terms of concessions in 2022 without the consent of the Federal Antimonopoly Service. At the same time, amendments to the agreements should not lead to an increase in tariffs for the population and a decrease in planned investments.

In addition, the Government of the Russian Federation will be empowered to establish cases of concluding a concession agreement by the end of 2022, the concessor for which is a subject of the country, without a tender.

For a number of violations, administrative liability for entrepreneurs will be mitigated. Thus, the rule on the replacement of a fine with a warning for the first offense can be extended to all offenses identified during the inspection.

Shares of international companies with different amounts of rights are planned to provide a Russian legal basis. We are talking about organizations that can be registered in Russia only in the territories of special administrative regions in the Kaliningrad region and in the Primorsky Territory.

It is proposed to appoint a regional operator for the treatment of municipal solid waste without a competition. This is possible if the tender was declared invalid or in case of early termination of the company’s activities. The term of the contract cannot exceed one year.

Also, for drivers deprived of a driver’s license and twice paid an administrative fine for driving without them, criminal liability is established.

The bill is aimed at improving the infrastructure and increasing the turnover and investment attractiveness of using digital rights. In particular, operators of electronic platforms are established, in which digital financial assets are issued, as well as requirements for working with them.

A new, simplified, procedure for the redemption of its own shares by a public company is proposed. You can use it only for the purpose of buying securities to motivate and encourage your employees and employees of controlled organizations.

Shareholders who are not known and who do not exercise the rights of shareholders for more than two years will have their dividend payments suspended. They will also no longer receive notices of meetings and absentee ballots. These rules will apply to public and non-public joint stock companies with 50 or more shareholders.

The amendments are aimed at improving the mechanisms of public-private partnership for the implementation of long-term infrastructure projects and increasing their investment attractiveness for private investors. In particular, it is planned to extend to concessionaires the right to use the subsoil on the site for construction. It will also significantly expand the rights of parties to agreements in terms of maintenance of facilities, the possibility of concluding agreements with respect to objects of construction in progress.

It is proposed to empower the customs authorities to conduct investigations in criminal cases on crimes related to the withdrawal of capital abroad.

The Government of the Russian Federation will be empowered to approve the procedure for storing seized items that have not yet been recognized as material evidence, and seized property.

It is proposed to limit to one year the period for reviewing the court decision on the payment of compensation to the rehabilitated.

The procedure for payment of forensic examinations is specified. In particular, it is envisaged that experts will receive remuneration for work performed by them on behalf of the court, if the latter is not part of their official duties.

For public calls to take action against the security of Russia, it was proposed to establish criminal liability for up to seven years in prison with a fine of up to 2.5 million rubles. Also, the participation of Russian citizens in hostilities against the interests of the Russian Federation abroad will be punished by imprisonment for up to 20 years with a fine of up to 500 thousand rubles.

Svyatenko supported the creation of a unified training system for counselors

A teenager drowned in the Permian river

In Krasnoyarsk, a case was opened after a child fell from...