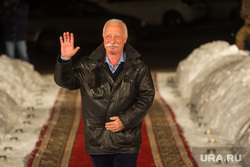 A resident of Kharp (YaNAO) Andrey Zaitsev starred in the TV show “Field of Miracles”. The show airs on Channel One. The episode will air on November 25.

Yamalets visited the show with his wife Irina, they sang a song, MK Yamal reports. “The game studio is exactly what we see it on TV. A lot of light, the famous drum and, of course, Leonid Arkadievich himself, ”shared the wife of the participant.

The man gave Yamal souvenirs to Leonid Yakubovich. Zaitsev won a vacuum cleaner, a set of tools and a double boiler, but refused to participate in the super game.

Earlier it was reported that the head of the Nadymsky district of the YaNAO Dmitry Zharomskikh presented TV presenter Leonid Yakubovich with a statue of a mammoth. The politician gave the gift through Fania Zamesina, a resident of the village of Priozerny, who took part in the release of the game “Field of Miracles”.