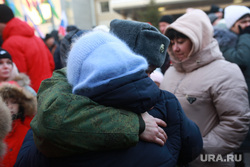 Leonid, a member of the NWO, returned to YaNAO after recovering from his wound. This was reported in the telegram channel “Zakso YaNAO”.

“During the performance of a combat mission, I came under shelling, received a severe shrapnel wound in the stomach. After a long recovery, he is finally going home – his wife Angelina and one-year-old son Nikita are waiting for him in Salemal, ”the telegram channel reports.

It is noted that Leonid left as a volunteer. Now he needs to restore the documents that were burned during the shelling. The deputy of the Legislative Assembly Timofey Laptander met the Yamal resident, he also promised to provide the necessary legal assistance. Since February 24, the Russian military has been conducting a special operation to denazify and demilitarize Ukraine.

Earlier, URA.RU reported that a member of the NWO from the Shuryshkarsky district returned home for a vacation. At the front, the man left in June.